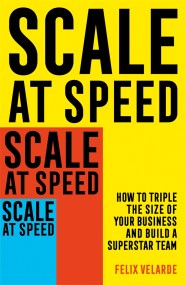 Scale at Speed shows you how to double your company's revenue in two years. It is a must-read for anyone who wants to safely and…