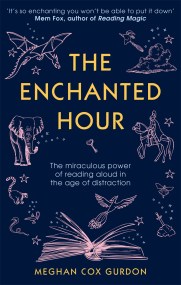 'As soon as I began to read, I was filled with that kind of engrossed blossoming that happens somewhere inside of you when you start…