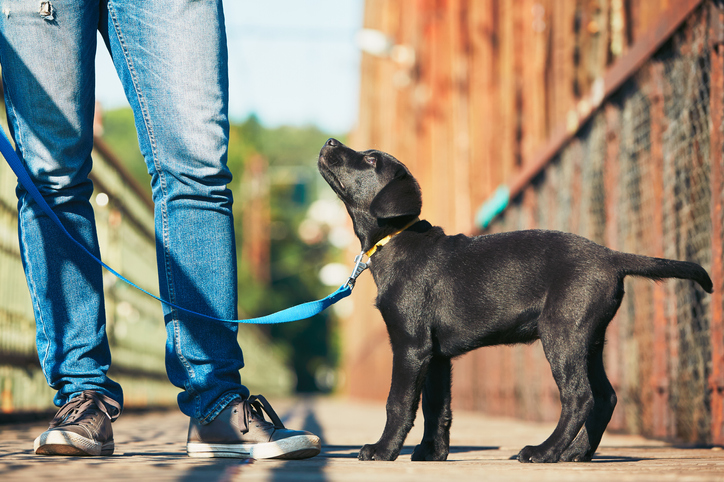 Like children, dogs are born without behavioural issues; it is what happens in the early weeks of life, and the way in which his new owner nurtures, guides and educates him that will enable him to become a well-balanced adult – or not. In this article, Lesley Harris and Caroline Spencer help you ensure the first few weeks of your puppy’s new life with you are as positive as possible, and set you on the path to having a well-trained new best friend.

See the World from a Puppy’s Point of View

Your puppy at ten to twelve weeks old is roughly the equivalent of a young toddler.

You have taken him from the only home he has ever known, from his mother and siblings, and placed him somewhere strange, with strange humans who can’t speak his language, and often without another of his species in sight.

How would a toddler feel? In fact, how would you feel?

Children up to two years old and puppies of up to sixteen weeks have been scientifically proven to display very similar basic emotions. They also use similar body language to convey important messages. Neither are naughty or aggressive. But both can be confused or upset. Both need understanding and guidance. Neither have command of verbal language. We must understand their needs by learning how they use body language in their efforts to communicate. If you watch you will learn. They watch and learn from you!

We are not advocating treating your puppy exactly as you would a human child, but it is very helpful to see and understand the similari­ties, as well as appreciate the differences – using what you do know to help you to understand the things you don’t.

When raising a human child, it is best to take the time and trouble to gently guide and show – by example – how we wish him to behave. By doing this we create the kind of calm, secure, fear-free atmosphere which is conducive to learning. When he does not understand what we require of him and is only doing the wrong thing out of fear and confusion, we wouldn’t punish him, but instead kindly and calmly show him how to get it right.

For example, if your toddler is, say, chewing the remote control or twiddling the knob of the hi-fi, what would you do?

Well, in this enlightened age it is unlikely that we would roar at him, smack him and ‘put the fear of God’ into him. Why? Firstly, he is too young to fully understand that what he is doing is not acceptable and possibly dangerous. Secondly, it is also setting the scene for fear and misunderstanding. It is not teaching in a way that will make him trust us, to come to us with problems and in all ways to bond with us. Finally, and most importantly, he is not learning how to get things right – only the consequence of getting things wrong.

Instead, when a toddler is too young to understand right from wrong, we would use redirection. We would gently remove him from the area of conflict, and engage him in a more interesting and appropriate activity.

When he is older we would gently explain why a certain action is unac­ceptable, and then show him with speech and by example the acceptable way of behaving. If he understands, but deliberately defies us, we would use effective but non-violent ‘consequences of action’.

You can use exactly the same principle with puppies. Of course, your puppy will never understand why, but he will learn what is acceptable behaviour if taught by example in a non-verbal, canine-appropriate way.

The Problem with Sit

There is a school of thought that states: if you get a dog to sit, there are many, many things it can’t do – get into trou­ble being highest on that list. In our opinion, the only very important thing it won’t be able to do is to think for itself.

Do we tell our children randomly to ‘Sit!’ in every situ­ation? We may say, ‘OK sit down for a moment and speak with me’, in order to calm them down, but not as a panacea for all ills.

If a pup can’t do it, he is not getting it wrong – we are teaching him badly. We are teaching him something that no other dog has ever asked of another, and the pupil is just asking, ‘Why?’ and ‘What’s the point?’ What’s more, get­ting a puppy to sit and stay is not physically good for him. Research has shown it is detrimental to good physical health in the young, putting too much pressure on young spines and joints, let alone their immature cognitive ability. If we are teaching him the sit in order to stop another behaviour, then we are crushing the pup’s natural language, and frustration will set in and behavioural issues (such as nipping and tail chasing) begin through undue stress.

For example, many are advised to get a puppy or young dog to sit in a shop doorway and watch the world go by. Cars and bikes and strange dogs go past. Humans will go past, making eye contact. When allowed to behave naturally, if a dog is worried by a situation it would get out of there and reassess from a safe distance – and this is exactly what you should be doing for him as he is restricted by a lead and unable to follow his natural instincts. Instead, these dogs are told to ‘sit there and be quiet’. Your puppy needs choices, and you will have to help him with these because he will generally be attached to you by a lead. You need to have buckets of empathy when you take him out and about.

Bribery doesn’t work, either; what it does is get the child or dog to only perform when you have food or gifts. If you buy a child everything he wants, when he wants it, then all you are to that child is a money bank or a present giver. If the child or puppy gets attention for doing the wrong thing, then that turns it into a way to get your attention. They’ve trained you to stop whatever you are doing and look at them. We’re not in any way asking you to ignore bad behaviour, but we will show you how to deal with it in a silent and proactive manner.

There will be a lot of new experiences in your puppy’s first few days. Comforting with words, cuddling and generally fussing is natural to us when we see a vulnerable creature in fear, and we have the very best of intentions, but it sends entirely the wrong message to your puppy.

Even with children this approach can be inappropriate in certain circumstances. Think of the first time your child experiences a thun­derstorm. You have one of three ways of reacting:

We think it’s clear that number 3 is best!

Obviously you cannot speak to your puppy in the way you can your child – and nor would it be desirable in times of stress. Words mean little to a puppy; they distract his focus from your body lan­guage (which is a canine’s main way of reading another creature) and often convey a state of stress. When you are either correcting behaviour or in a worried frame of mind, it is far better to remain silent. Show by your body language that you are not reacting because you have decided that there is nothing to fear, and that you can be trusted to deal with anything life throws at you and you will keep him safe. Then he will decide that there is nothing for him to fret about.

Visitors to your Home

Most people are excited about a cute new puppy, and you have man­aged to hold wider family and friends off for a week or two. But now that your puppy has settled into your home, and he is beginning to accept and bond with the people with whom he will live, how should you introduce him to your friends?

When someone enters your house, the first thing they will do is look down at the puppy. However, eye-on-eye contact isn’t something that seems welcoming to a dog, and this will cause your puppy some concern. This is when stressy jumping up and peeing on the floor can begin. Instead:

One Paw at a Time: Introducing your Puppy to Guests 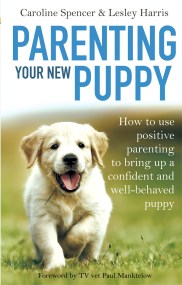 In this practical, readable and entertaining book, Caroline Spencer and Lesley Harris bring a new slant to a well-explored subject and propose significant shifts in an owner's understanding of why their puppy behaves as he does and what makes him tick.

Like children, dogs are born without behavioural issues; it is what happens in the early weeks of life, and the way in which his new owner nurtures, guides and educates him that will enable him to become a well-balanced adult - or not.

Drawing on a combined 40 years of experience, the authors will help you in your initial choice of a puppy. When you take him into your home, it will show you how to interpret natural canine communication and play, and how to use these signals to educate and guide your puppy in a positive way. The confidence he gains in you, the parent, will help him through sometimes difficult and confusing situations, to become a happy, trustworthy, and trusting friend for life.